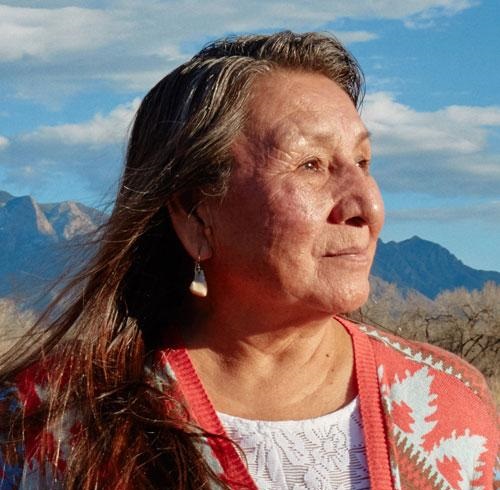 An enrolled member of the Oglala Lakota Nation of the Pine Ridge Reservation, SD, Loretta is an elder and Medicine Carrier for her tiospaye (extended family).

Loretta, and her husband Tom Kanatakeniate Cook, who oversaw Running Strong’s Slim Buttes Agricultural Development program on the Pine Ridge reservation for many years, are active in hosting Sun Dance ceremonies every year along with the Afraid of Bear, American Horse and Red Cloud tiospayes. Loretta is the female Sundance Leader for the Afraid of Bear/American Horse Sundance. As a fluent Lakota language speaker, faith keeper and holder of the pipe, Loretta is a cultural consultant and interpreter.

In 2016, Loretta made history as part of a delegation of Indigenous leaders who formally presented Pope Francis with the “Petition to Revoke the Papal Bulls of Discovery.”