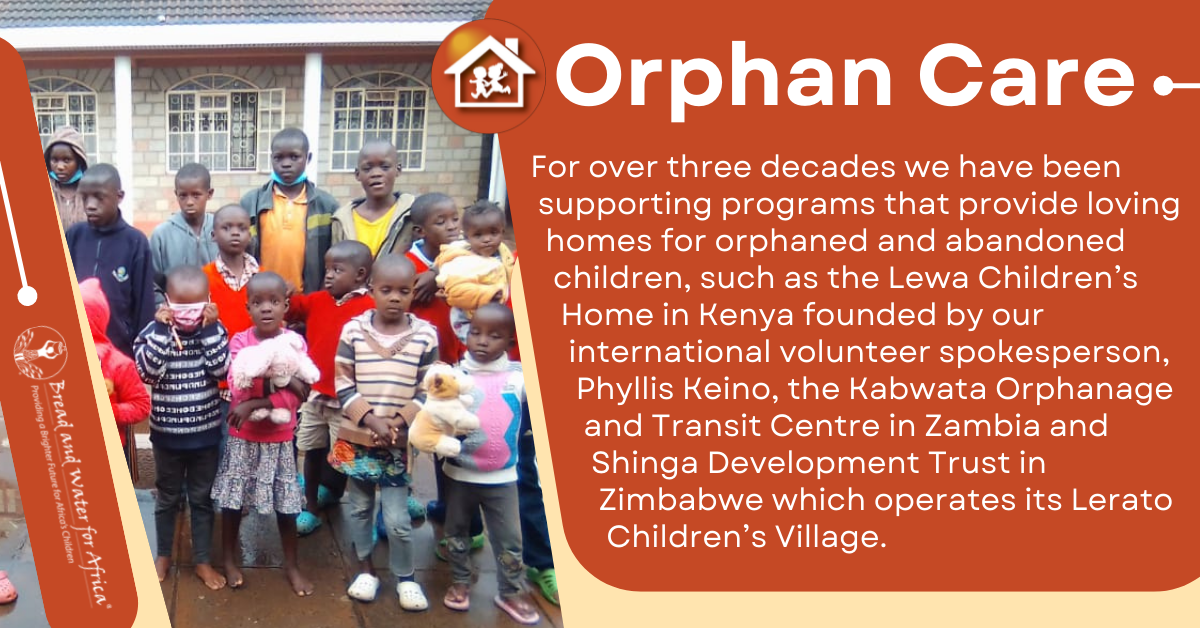 Of all the worthy programs Bread and Water for Africa® funds in nearly a dozen sub-Saharan African countries – clean water, healthcare, education – nothing is more near and dear to our hearts than orphan care.

That’s why for some three decades we have been supporting programs that provide loving homes for orphaned and abandoned children, such as the Lewa Children’s Home in Kenya founded by our international volunteer spokesperson, Phyllis Keino, the Kabwata Orphanage and Transit Centre in Zambia and Shinga Development Trust in Zimbabwe which operates its Lerato Children’s Village.

Most recently we have been providing support to the Karen Baird Children’s Home in Sierra Leone for its large-scale agricultural operation to grow rice and cassava (the two primary staple foods in the country) for the roughly 100 children living there, as well as to sell the surplus to help offset the administrative expenses of caring for so many children.

In Kenya alone, it is estimated that there are more than three million orphaned children, and thanks to our supporters Phyllis is able to care for dozens ranging from infants to teenagers on the verge of adulthood, who for many she is the only “mother” they have ever known and Lewa is their home no matter where they came from or the circumstances that brought them to her.

In Zambia, Kabwata executive director Angela Miyanda founded the orphanage to meet the basic needs of hundreds of children through the provision of food, shelter, healthcare and love “to help the children reach their full potential in life.”

Among them is Mwila who with his younger brothers were orphaned and alone in their village after the death of their mother.

“The food they could find was never enough, and when they were able to find food, Mwila gave his food to his younger brothers while he remained without food most of the time,” Angela reported.

That was until he eventually became malnourished himself and by the time help arrived for the boys, but it was already too late for him to fully recover having developed epilepsy.

“However, upon arriving at Kabwata, with determination for a better future, he completed school and is now in college working towards a diploma in teaching. He has achieved a lot, even though now than then the illness gets him.”

And in Zimbabwe, Shinga founder and executive director Margaret Makambira oversee its livestock and agricultural activities “to generate income and contribute to the children’s diet and nutrition.”

At Lerato, Margaret and her dedicated staff are caring for around two dozen children at any given time which she describes as “a Place of Safety for orphans and vulnerable children without traceable relatives” with the objectives “to empower and equip them with life skills with the aim of enabling them to become self-sufficient” and ultimately “to create a new generation of young people who are motivated and able of lifting themselves out of poverty.”

Angela sums up what she, Phyllis and Margaret have been, are continuing devoting their lives to, saying:

“Each year, thanks to your help, new children take steps to reach their very best for the future.”